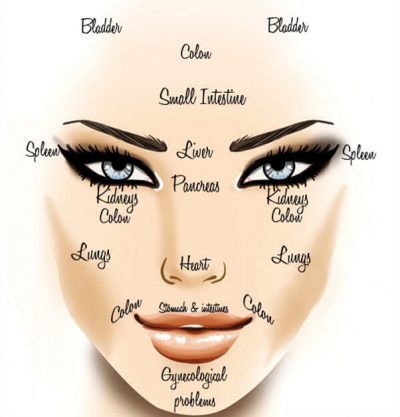 Have you heard of this – face mapping? Yes, it’s an actual prognosis on skin and acne from Ayurveda (one of the world’s oldest holistic “whole-body” healing systems – developed more than 3,000 years ago in India. It’s based on the belief that health and wellness depend on a delicate balance between the mind, body, and spirit) and traditional + ancient Chinese medicine.

In a nutshell, where you’re breaking out has a BIG meaning behind what’s going on internally. The only “face mapping” I’ve ever known for years was that breakouts around jawline translates to hormone imbalance – something that I’ve dealt with for years and years.

Your acne can help provide information about what’s going on in your body which can help you treat the breakouts properly by getting to the root cause instead of opting to popping them to their grave.

In this post I’ll share my personal experience with traditional Chinese medicine and what the outcome was.

I’ll clarify what your acne means in terms of where you’re breaking out on the face and how it correlates to your organs from traditional Chinese medicine point of view and Ayurveda (they are both linked to the same outcome per face mapping).

I will also explain ‘yin and the yang,’ as it’s something that most of us know as an Asian symbol (it relates to our body composition and positions where the breakouts occur) – but what does it actually mean, per holistic medicine?

Hopefully, this info will shed some light unto your acne and further explain some health issues you might’ve been having.

The Chinese method is holistic, based on the idea that no single part can be understood except in relation to the whole.

About 5 years ago I went to see a Chinese medicine specialist (recommended by a family friend) for a checkup (same logic as an annual physical in mind from a western doc/physician) and was stunned at how fast he was able to identify ALL of my internal health issues just by examining my pulse, tongue and ear.

Some health problems he stated I had, didn’t come to light until 2 years later after the initial checkup, which I thought he originally misdiagnosed me on.

In addition to examining my ‘odd parts,’ he asked a few questions on my bowel movement (how frequent) and my exercise routine. At that point in time, I did NOT workout at all, but wasn’t overweight.

After examining me, the first statement he made was that my internal body was operating more like a 55-year-old…keep in mind, I was in my very early 20s at the time. Like how does one compare a 55-year-old body to a 20-year-old (internally speaking)?

Well, I had a desk job, and haven’t worked out in years, so from a holistic specialist’s point of view, it all made sense. He told me that I NEEDED to walk a mile every day to make my body match my ‘youthfulness’ externally to internally.

As far as my persistent acne went, he told me it was strictly hormonal, which I suspected, but had no idea how to go about – which brings me to my next point.

This experience was one of the VERY first sure tell signs in my battle to clear skin – hmm, just maybe my poor/unbalanced nutrition may have something to do with chronic acne.

Reason why I thought this was because the specialist prescribed a mixture of dry herbs and advised me to take 3X, daily –specific mixture of various herbs contain minerals and nutrients that feed body’s cells to nurture, thrive and sustain health. Herbs prescribed were supposed to gently detox my body and normalize my hormone balance, which of course would lead to clearer skin.

After about a month, I noticed my skin improving – but after a total of 3 months, I completely gave up because I was feeling fine and skin seemed to be doing okay. But, after a week my skin stopped improving and reverted to its mean state full of pimples ☹.

I couldn’t afford to keep purchasing the mixture of prescribed herbs and sought out “other holistic remedies” from endless research, which became “trial and error phase,” for my search to beautiful, clear skin.

From that point on, I became fascinated (and just a little obsessed) with holistic healing on all our ailments and switched to alternative healing when it came to my immune system and of course, ACNE.

In traditional Chinese medicine, the face is an indicator of health or disease. By studying skin conditions and changes, we can determine inner imbalances and stressed areas of the body.

Because each area of the face is said to relate to an internal body area, disharmony in that internal area will, in turn, lead to a change in the complexion, texture or moisture of the corresponding facial area.

*The body’s organs and tissues can be classified according to yin yang theory based on their functions and locations.

Each organ can also be further divided into yin and yang aspects such as heart yin and heart yang and kidney yin and kidney yang.

In healthy people these forces are in harmony. In unhealthy ones they are out of balance. Poor nutrition, too much work or exercise can also throw the entire system out of balance.

The following is a skin analyses from Ayurveda and Chinese medicine and how breakouts potentially affect us based on face sections, per our internal health.

Forehead – Digestion. The upper forehead is linked to the bladder and the lower forehead correlates to the intestines.

Eyebrows – Adrenal glands. Coarse hair of the eyebrows indicates adrenal stress, with thick eyebrows being Yang and thin eyebrows being Yin. The adrenal glands are our “fight or flight – stress” response and secrete over 40 hormones and steroids. Overactive adrenal glands are commonly linked with stress, and lines stemming from the start of the eyebrow are linked with long-term adrenal stress and may correlate with tightness in the shoulder area, which is a referred pain area.

Eyes – Liver. Large eyes, eyes set wide apart, long eyelashes and white showing underneath the iris of the eye are Yin. Eyes that are small and close together are Yang. Eyelid allergies are linked to lung stress.

Between the Eyes – Liver. There could be a history of hepatitis, jaundice and/or liver stress. A diet that is high in fat, and eating late, may cause this area to show sensitization or flaking. Deep lines from liver stress may also be visible. This is commonly known as the wine and dine area.

Under the Eyes – Kidneys. Eyes may be puffy (Yin) or darker (Yang). If a client suffers puffiness and fluid retention, s/he needs to improve water intake. Grittiness under the eyes links with an excess of uric acid, common in Yin energy types. A pale white appearance of the inner lid indicates Yin energy, while a red inner lid area indicates Yang energy.

Chin – Reproductive organs. Breakouts in this area are often associated with the menstrual cycle in women.

Did you find any correlation between your breakouts and any internal health issues, per this post? Share below! 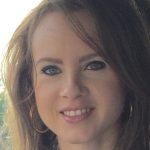 Hi Loves! I'm a Certified Holistic Nutritionist & passionate about natural health + amazing and prosperous benefits it has on clearing + beautifying the skin! I've researched high & low (so you wouldn't have to) how to finally achieve an acne free complexion! 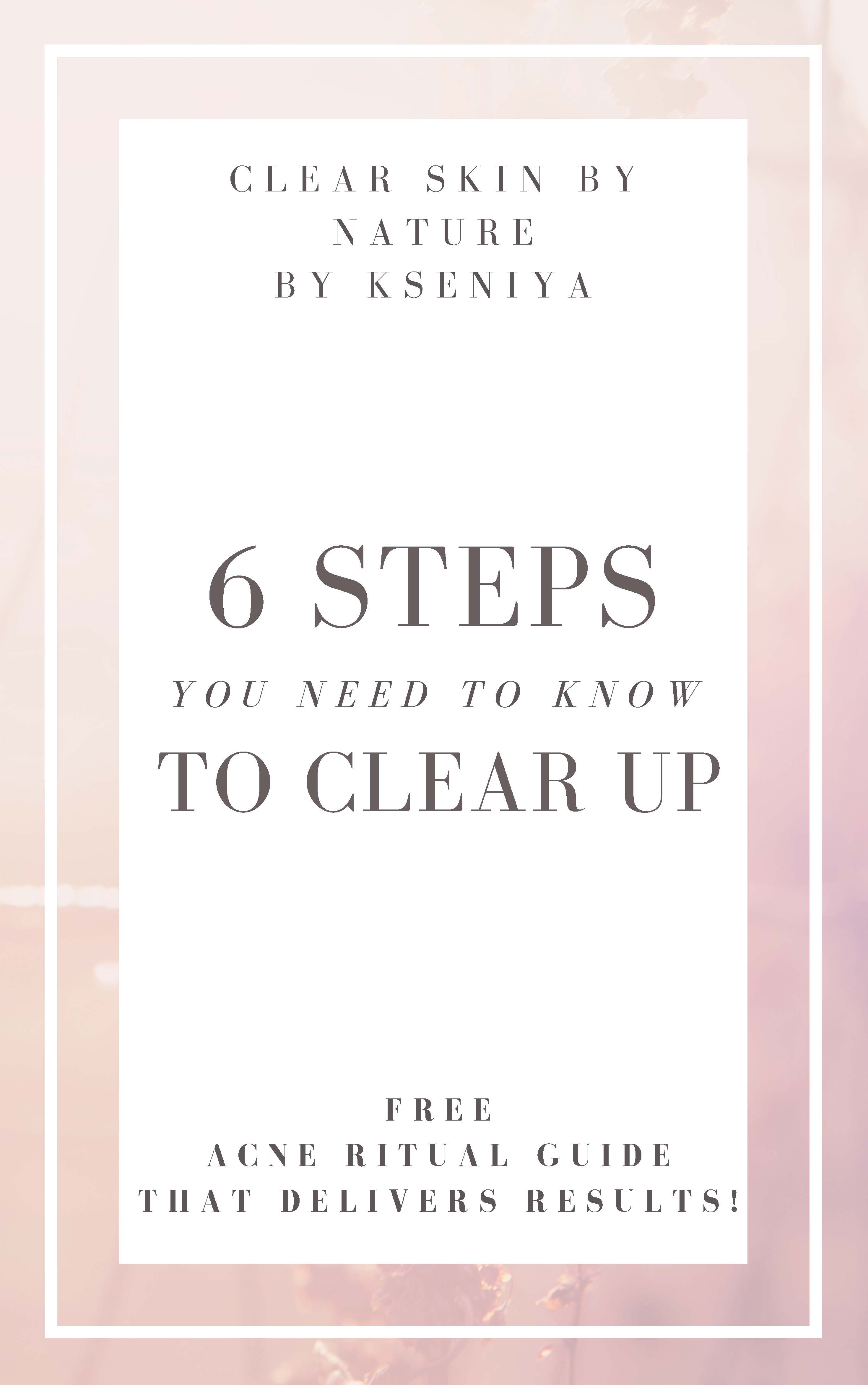